This post goes out in preparation for the Hahnenkamm Downhill, the most fearsome event on the World Cup skiing tour, which takes place this weekend on “The Streif” in Kitzbuhel, Austria. Specifically, though it goes out in honor of Eric Keck, the American Downhiller who etched his name in Hahnenkamm legend by launching over the “safety fence” in 1991, and emerging bloodied but whole, wielding his broken ski like a battle prize. This remembrance of Keck by Steve Porino comes as close to capturing that particular moment, and the essence of Eric Keck, as the written word can. 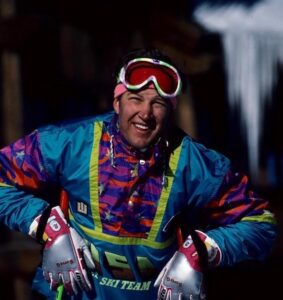 Keck, ready to roll as always

Keck left us far too soon, in 2020, but his warrior spirit—a combo of bravery, mischief, humor, and the-sky’s-the-limit aspiration—remains with all who knew him and especially on the Streif. The contact high of being around Eric and his exuberance felt like getting a golden ticket, a window into life’s possibilities. Fittingly, the charity honoring Eric is called “Keck Golden Ticket” and aims to strengthen kid’s lives through the power of action sports.

Eric’s birthday was on January 11, and his favorite cake was not a cake at all. It was his mom Bev’s lemon bars. The recipe got further customized by Eric’s wife Beth, to accommodate Eric’s request for “twice the lemon, half the crust.”

Beth is herself another magical being. She reminds us that lemons are, “Where summer hides in January.” To Bev’s original version, she doubles the custard, and reduces the proportions of sugar. Beth rolls with 2 cups total vs 3, which is plenty for my tastes. Even when halved from the original, the crust is still plenty sturdy to hold the filling. She also sometimes subs out almond flour for the regular flour in the crust. 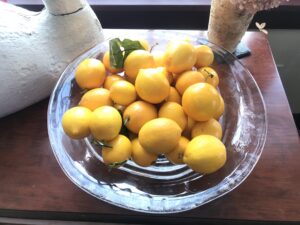 I took Beth’s adapted version and cross-referenced it with this recipe for lemon bars from John at Preppy Kitchen. He fills in some details and pro moves that don’t make the shorthand of handed-down family recipes. Among them: line the pan with parchment paper; wet the knife to cut the bars; freeze them if, say, you cannot be trusted alone with an entire batch of lemon bars in the dark days of January.

The Preppy version processes the zest into the sugar first, which is brilliant and I support the move, but in fuss-free kitchens…that ain’t happenin’! Plus, I kind of love the texture of zest when I run into it.

There are lots of options here, but there are some hard and fast rules:

I hope you enjoy this recipe as much as Eric did, and bonus points for enjoying them straight out of the pan with a fork while watching the Hahnenkamm this weekend. If you want to help more kids live large like Eric, please consider donating to Keck Golden Ticket. 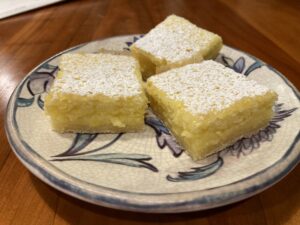 *Special shout out to Sister A for this particular Meyer lemon haul, and to my other lemon angels/dealers: Sister B, Cousin D and Auntie T (also featured in this splash of sunshine recipe). Have I mentioned using Meyer Lemons??? Ok, moving on…

Keep these in the fridge until they are gone, or freeze on a baking tray, then wrap tightly and freeze for up to three months (so they say). They travel like champs when the layers are separated by parchment or plastic wrap. 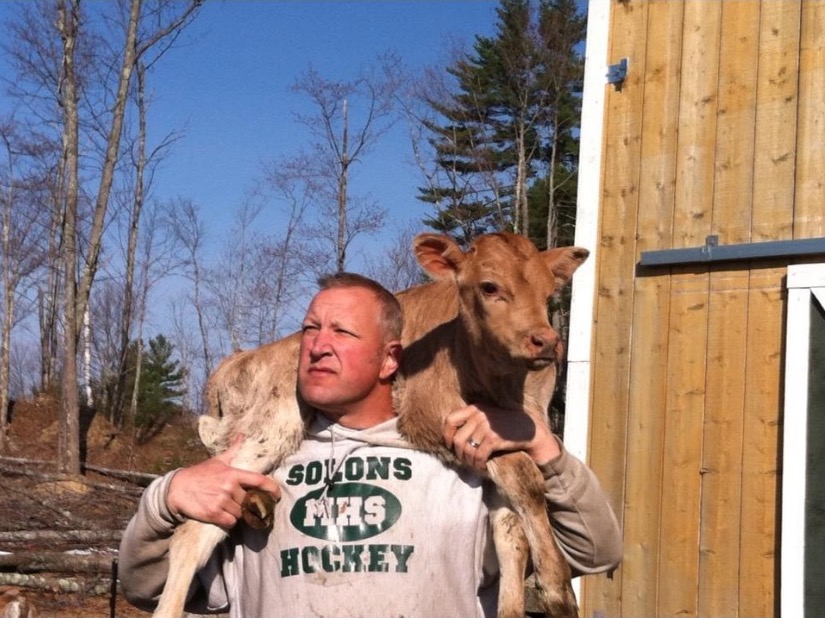 Keck, taking a friend along for the ride

It’s a dreary Sunday here in the east, with the promise of rain to take what’s left of our precious snow. As if in anticipation of this day, a heavy Priority Mail box from California recently arrived. Cousin D, in a race to save her California hillside of citrus from a cold snap, did a mass harvest and shared some of it with me. As a former Vermonter, D knows the mixed blessing of March in New England–winter’s easing its grip, but…the mud!–and the curative power of Meyer lemons. On top of that, she’s just darned thoughtful!

Rather than reinvent the citrus wheel, I’m going to revisit some favorites from Lemonpalooza 1, (Lemon simple syrup, and roasted lemon shallot vinaigrette for an off the hook chicken bread salad) and from the sequel, Lemonpalooza 2 (lemon pudding cake, preserved lemons and the lemon blueberry sunshine loaf that I discovered the last time Cousin D bestowed her citrus bounty on me.)

For breakie, squeeze some on top of the classic Dutch Bunny to put a big smiley face on your day, orrrr nothing says “I love you” and also “Don’t mess with me” like Sassy Sansa Lemon Ginger scones. If you really want to jumpstart summer, make up a Lemon Beach Pie.

Of course, there’s nothing wrong with plowing through your lemons as straight up lemon juice in and on everything. Tea? Smoothies? Sprtizers? Cocktails? Yes please!

If you’ve already embarked on spring training, squeeze them up for some minty snap pea salad, lemony shrimp and bulgur salad, lemon cauliflower couscous or pretty much anything that could use some fresh zip.

Wherever you are on this spring day I hope you find some brightness and warmth. 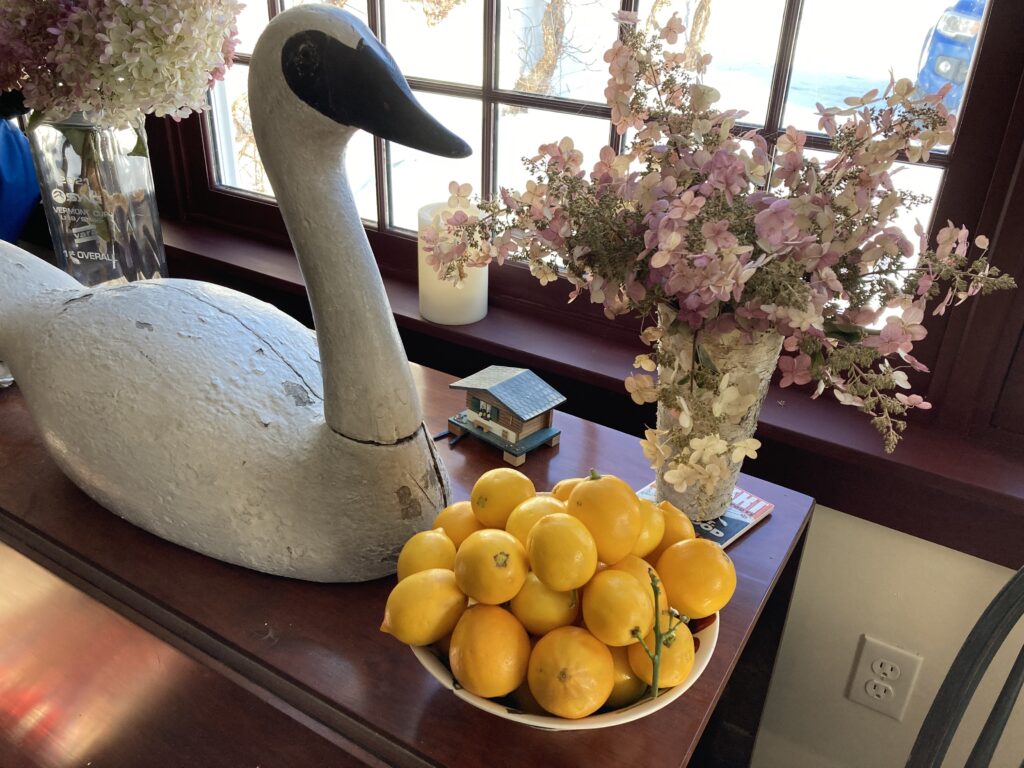 Happy Mother’s Day! My gift came a day early, from California. My amazing Auntie Tina, who knows how much I covet her Meyer Lemon tree, sent a surprise care package straight from her tree and her kitchen.  It was the very best thing in the world to open on a snowy, windy May morning in New Hampshire. Money may not buy you happiness, but fresh lemon marmalade on toast sure will.

Tina makes me think of great moms and of the way they make you feel special on every day. My Nina was all that, and I’m really happy and excited that she’s getting some airtime in today’s New York Times. I hope you get a chance to read this, and that it brings a little peace to people who need it on Mother’s Day, or any day.

For kids out there, of any age, wondering if you can pull off making breakfast for your Mom, you CAN! And you can probably do it with what you have on hand. Might I suggest Dutch Bunny, Blueberry Dutch Bunny, Popovers or 3-3/2-2 crepes, all of which benefit from a squeeze of fresh lemon. Whatever you come up with, you know she’ll appreciate the effort, so here’s the only part of the recipe you truly need to follow: Serve it up with a whole lotta love!

Whether or not cooking is happening, let’s give it up for our mom’s today. And when life gives you lemons, say “Thank you!” 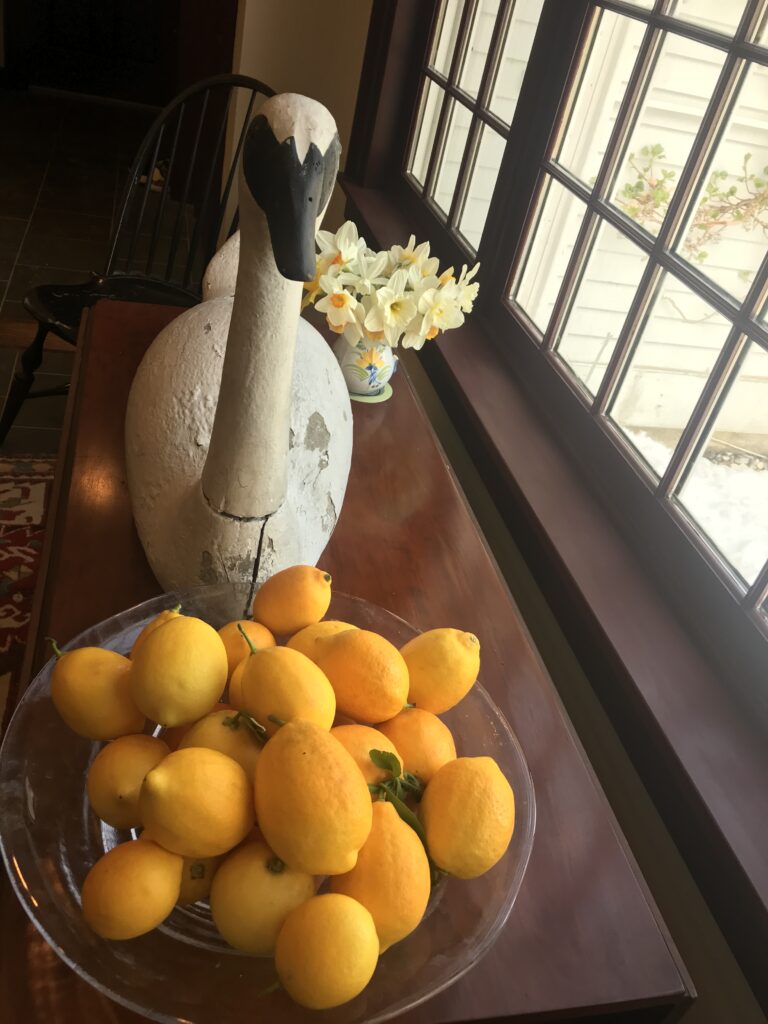 Thank you for the sunshine Tina!