We all have those friends who don’t F around, who cut to the chase and know just what you need, when you need it. I am blessed to have a fleet of them. A battalion? Whichever is bigger, and armed with more badassery and love. Most of the time they simply make life fun. When you face challenges, they make life So. Much. Better.

Exhibit A, is German Jules, gold-hearted truth-teller and purveyor of the giant triple spicy margarita. I did promise a review of Bring It Fiesta basics, but, because Monday is the new Friday, we’re jumping ahead to the crown jewel of our Cinco de Mayo prep. It’s the right thing to do, because if you’re going to bring your Fiesta A game, you might need to practice.

This recipe (as seen in the proper volume below) comes straight from the source (above), with guidance from the bottle of Ancho Reyes, a little treat that apparently has been around since 1927. Close to 100 years later I am on it! And because I am a rule follower, I will from here forward obey the label: “No Acepte Imitaciones.”

The spice come from ancho chiles in the liqueur, ginger in the ginger beer and, if you dare, jalapeños in the infused vodka. You can dial down the heat by using regular tequila, and the strength by using more ginger beer. You know you, so adjust accordingly. And…Olé! 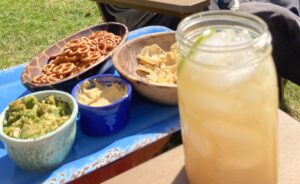 Combine everything but the ginger beer, and shake with ice. Pour over ice and top with ginger beer. Dial the ginger beer up or down to get the desired effect. Pro Tip: Pour a ginormous one in a huge vessel over tons of ice. Take your time—say an afternoon—pouring more ginger beer over the top to refresh and slow your roll.

*Make your own jalapeño infused tequila by slicing up some jalapenos into a mason jar, filling with tequila and letting it sit for a few days. Strain and enjoy. Here’s an actual recipe for it.

** Technically, the recipe on the bottle calls for 1/2 part sweetener, but Jules goes with a splash Do what you will for you or your crowd. 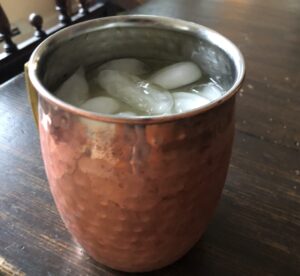 The thing about getting through this pandemic with any sort of grace, is having hope. For me, that hope has now come down to Cinco de Mayo and the prospect of a great excuse to drink margs and eat an irresponsible amount of avocados. Maybe I misplaced the irresponsible in this sentence, but regardless, this is an occasion worthy of preparation.  Let’s venture back to last Cinco de Mayo, which was on a Saturday and coincided with what was supposed to be Derby Day. Instead, it became a a sad early milepost to all the celebrations we would lose.

But this Cinco de Mayo will be different. It marks us clawing back at a social life.

Granted, it’s on a Wednesday which is kind of fitting, because long ago my inner circle determined Wednesday is the new Friday.

So let’s spend the rest of our month planning for it shall we?

First up, salsa verde. This is a super easy recipe that involves roasting tomatillos, onions and jalapenos then pulverizing them with a mass of cilantro (Nothing to see here, Sister B). The original recipe calls for olive oil, which tastes great but gives it a weird texture if you refrigerate it. I say bag the oil, but the recipe Gods say you’ve got the option.

I never ventured into tomatillos before, because the husks seem intimidating. They seem to say, “These are for other, more skilled people.” But it turns out, tomatillos are for this person! They’re tangy and kind of citrusy, so they’re even good raw, but amazeballs when roasted and salsified.

I came across this recipe after making an awesome and awesomely easy crock pot recipe of salsa verde chicken, that basically involved chicken and a jar of salsa verde. My friend loved it and wanted to make it for his mom who is on a low sodium diet, so we looked at the label on the jar and…no bueno!

Making salsa verde was the pro move here, and luckily it is totally easy. Easy seems like a great place to start for our Cinco de Mayo prep, so get yourself some tomatillos and let’s get this party started!

Serve with chips alongside quick easy cheap salsa or…. bake up a batch of baked salsa verde chicken (thinking it would work with tofu as well) or… press the big fat easy button and use it to smother chicken in a crockpot.

Next up…a review of our Bring It Fiesta basics. And yes, we’re starting with Hero Slaw!