The saddest day of the year for me is the day they stop serving maple creemees in my hood. That was on the last weekend of October, when Mac’s Maple closed. It wasn’t a real ice cream day, but to honor the occasion I secured two of their maple creemee pies. I figured they would be my step-down program, and perhaps inspiration for my own recipe for the same. Rigorous testing ensued.

The first test was between the purchased version—the control pie— and my own creation, a riff of Nina’s Margarita Pie. Scouring the Internet for ingredients of legit maple creemees had confirmed that this was a good master recipe to use as a starting point. Immediately, my group of testers confirmed that the control pie’s waffle cone crust was, as one tester indelicately put it “f’ed up.” It was indeed far inferior to the pretzel crust of Margarita Pie.

Still, it needed some tweaks. My first creation tasted good but, as another tactless tester (this one related to me) noted, “you need an axe to get through it.” Here’s where the science came in. I realized that margarita pie contains alcohol, which keeps it from freezing up like a brick. Adding more whipped cream could also help the pie retain a softer, more utensil-friendly, consistency.

I’ll spare you the details to the entire process, but a stalwart tester, when confronted with the two latest versions, said he felt a bit like Chuck Yeager. He was not far off. When Thanksgiving is this close, every pie matters! We needed something as good as Joni Mitchell Apple Pie, Knock Out Vegan Pumpkin Pie and Pilgrim Pie. And, this being a new player amongst traditional faves, we needed perfection.

Friends, my testers unanimously confirm, we now have it. I offer here maple creemee pie perfection, the clear winner, and a non-alcoholic version as well which is a worthy silver medalist. The use of alcohol, I assure you, is not gratuitous—it’s where good science meets good taste. That said, you can save yourself a trip to the liquor store, use a little more maple syrup and a touch of vanilla, and still have yourself a darned good maple creemee pie.

The constants in both versions: The crust is the bomb! It is equally excellent with regular and gluten-free pretzels. The cream is your structural integrity, so whip it good, until it has very stiff (even jagged) peaks, yet hasn’t turned the corner to butter.

Finally, to my Vegan friends. I failed you on this round. I tried two oat milk fillings, this one with nut butter and this one with cashews. I know there are pros out there who can work their sweet magic with such ingredients (looking at you, Sister A), but not me, not yet. I have not given up, but I need a rest. Sometimes, a girl’s gotta not eat.

One happy side note, is that after all this testing, and knowing that I can get my fix anytime, I really am ok with waiting six plus months for my next maple creemee. But you out there? You’ve got a lot more creemee pie capacity in you. I hope you enjoy this and every other deliciousness on your Thanksgiving table. Holidays, here we come!

*For non alcoholic version, omit liqueur, and adjust to use 1/4 cup maple syrup, or to taste,  plus 1/2 tsp vanilla (optional-Chuck Yeager opts out of it).

** I like the full 2 cups of cream. If you don’t use the liqueur, and boost the maple flavor with more syrup, extra cream is the right call.

*** These are way optional. Veteran testers say leave it alone as is, but one rogue tester notes that the pro pies featured these, and he was enamored by the flourish.

Make Pie Crust:
Melt margarine or butter and combine with sugar and pretzel pieces. Press into buttered 9” pie pan. For the mini versions, line 20 regular sized muffin tins with cupcake liners. Spoon the crust mixture into the cups until it is all used up, then use an empty liner to press the crust in place firmly. Refrigerate or freeze to cool while you make the filling.

Whip the cream until it is very thick and stiff. Fold in the whipped cream as gently as you can until it is fully incorporated. Pour into pie crust and freeze for at least four hours, more to be safe.

Warm weather travel with this is not recommended, but if you are celebrating away from home, and have the time and space for it to freeze, it is easily assembled on site. Just prep the pretzels first and put them in a Ziploc bag. Portion out the booze and syrup, grab a pie plate and fill a bag with the rest of the ingredients— cream, a stick of butter and that can of sweetened condensed milk that expires sometime this decade. Make the pie right away so it has max time to freeze, and you have max time to put your feet up and prepare to be worshipped. 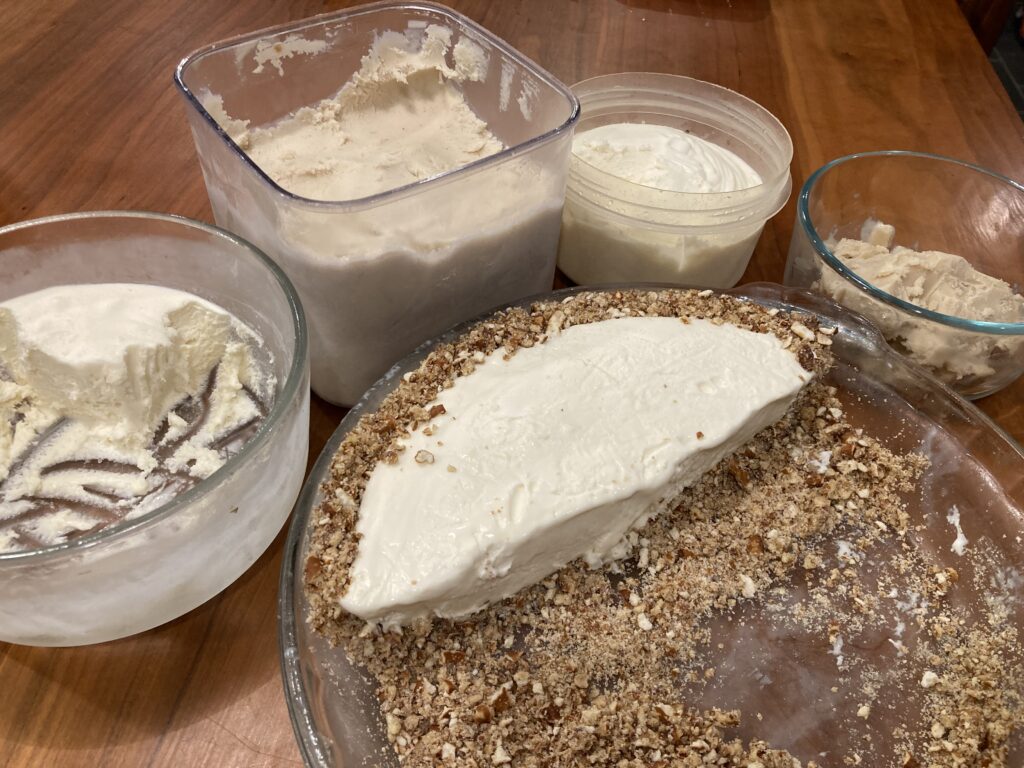 We can’t all be winners

This post does include a delicious recipe that I have been meaning to share for a long time, but it’s more about friends and family and remembering and gathering. It is a loving shout-out to my Aunt Judith, who we honored last weekend. Judith was one of the most colorful people on the planet, quite literally. You’d be hard pressed to find any picture of her dressed in earth tones. It was her colorful personality, however, that shone through: the conspiratorial belly laugh that, together with the twinkling eyes, invited you into the underlying mischief of the moment. As my mother’s younger sister, she took it as her duty to show us that it was ok—even preferable—to color outside the lines.

Judith would have appreciated the happy gathering orchestrated by her daughter, the fabulous  Pamina, resplendent in chartreuse and fire-engine red. The tribe came together, decked out in a full spectrum of colors on a brilliant November day, where the strangely persistent yellow foliage boldly defied the bleakness of stick season; and where Cousin Danielle’s Rolling Stones  tribute cheerfully defied church convention. It was perfect.

In addition to the colors, laughter, music and stories, it also seems fitting to remember Judith with food, of which she was a fan. Some of her favorite dishes were comfort food classics, like Italian fare and meatloaf. She also strove towards healthy eating, though the striving and the reality didn’t always match. These meatless meatballs seem like a fitting compromise between her desires and her aspirations.

They are mushroom-based and, like Judith, can accommodate all guests. As written, they include eggs and a small amount of cheese, but for Vegans making the appropriate substitutions is child’s play. These also involve some planning to accommodate chill time, forming and baking, but once you’ve done the drill they are quite easy. Crank up “That’s Amore” and get into it. They are delicious, which is all that really matters.

The only real downside is that color—Judith’s hallmark—is not well-represented here. Aside from that, these have everything you need for a tasty meal, and with enough sauce you’ve got color too. So, here’s to you Aunt Judith. You got us all together once more, in full color, and we love you to la luna and back. 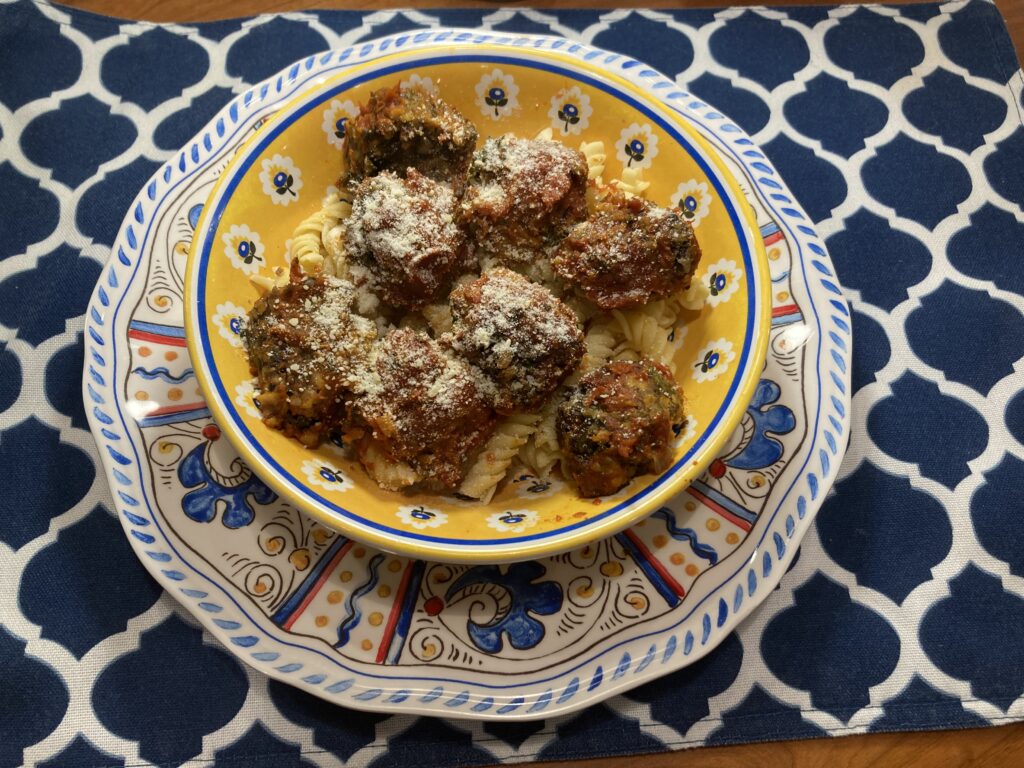 Lots of taste, not so much color

Stir onion into mushrooms and cook, stirring often, until onion is translucent, 5 minutes. Remove skillet from heat and stir garlic into mushroom mixture until fragrant, about 1 minute. Transfer mixture to a mixing bowl.

Mix oats into mushroom mixture until thoroughly combined. Gently stir 1 ounce Parmigiano-Reggiano cheese into the mixture. Add breadcrumbs, 1/4 cup parsley, and 1 egg, season with salt, black pepper, cayenne pepper, and oregano. Mix with a fork until crumbly. Stir in the remaining 1 egg. The mixture should hold together when pressed.

Cover the bowl with plastic wrap and refrigerate for at least 4 hours. For best flavor and texture, refrigerate overnight.

Form mixture into small meatballs using a 2-tablespoon scoop. Roll meatballs lightly between your hands until smooth, if desired; arrange meatballs on a prepared baking sheet.

Bake in the preheated oven until meatballs are lightly golden brown, 12 to 15 minutes. 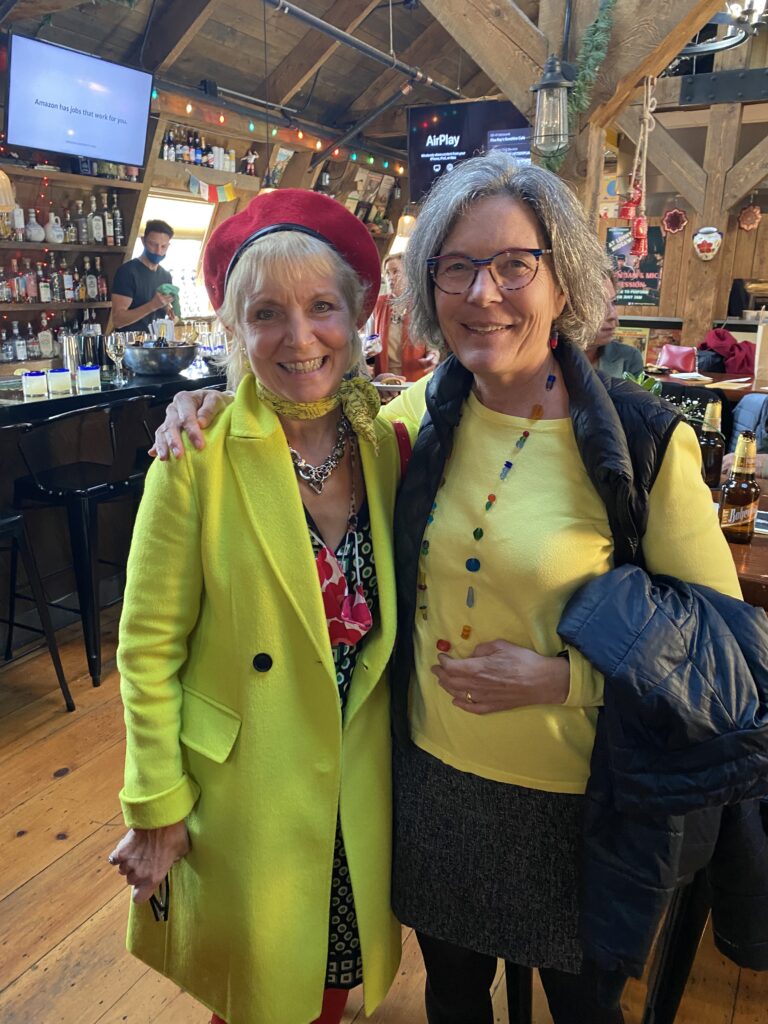 Cousins Pamina and Beatie, in color 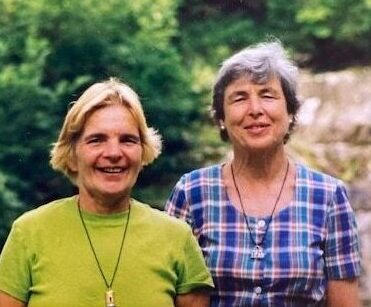 Sisters Judith and Nina, smiling as they did.