As apple season comes to a close it would be a crime to miss the topic of apple pie. And it would be more of a crime if you did not make an apple pie because you were daunted by making the crust. Despite what the aggro bakers say, it is not a crime to use Betty’s little helper, the refrigerated roll-out crust. I’ll never reveal them, but I know bakers at the highest level who resort to the Pillsbury solution on occasion with no damage to their reputations.

So let’s get to it. I made this pie with the last of our organic (read untended) pears and “Joni Mitchell” apples. You know, “…Give me spots on my apples, but let alone the birds and the bees now…”. I based it on the King Arthur Flour best apple pie recipe with the following slacker alterations:

Obviously, I skipped the homemade crust. I used pears and apples, did not peel them (they’re organic fergawdssake), and grated half the apples before I realized I had the wrong blade on the cuisinart. I subbed maple syrup for the apple cider syrup, used flour instead of “pie enhancer,” and subbed cinnamon and ginger for apple pie spice. Alright already! Here it is, and it was outstanding.

To make the crust:  Take the box out of the fridge and let it warm up a bit.

To make the filling: In a large bowl, stir together the filling ingredients, mixing till well-combined. Set aside. (I LOVE that part!)

Assembly: Unfurl one piece of pie crust and lay it into a 9-inch pie plate. Spoon in the filling. Unfurl the other piece, lay it atop the filling, and seal and crimp the edges. Brush the top crust with milk, and sprinkle it with coarse sugar, if desired. Or, save out a bit of the crust, and cut decorative leaf designs, laying them in the center of the crust or around the edges. (yeah, right.)

Baking: Place the pie on a baking sheet to catch any drips. Bake in a preheated 425°F oven for 15 minutes. Reduce the heat to 375°F, and bake for an additional 45 minutes, or until the top is brown and filling is bubbly. Yield: 1 pie, about 10 servings. 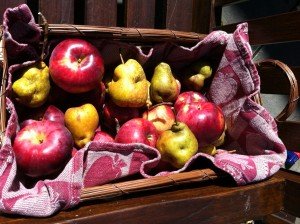 Joni Mitchell apples and pears–not the prettiest, but darned tasty.