And now, in time for your Labor Day entertaining, I present the third of three condiments, and by far the best. I discovered this recipe way back in early summer, nestled in the margin of “The Simple Issue”  of Bon Appetit. Within a week the page was permanently folded back, stained and a little greasy, and since then my fridge has never NOT had a jar of chile crisp in residence.

The catch on this spicy, sassy, savory creation is that it takes some effort to make. You can cut yourself some slack by buying pre-peeled garlic cloves. Even with those, you’re still going to have to do a lot of thin slicing. Soooo, dig deep! It’s the last weekend of summer, people. Get yourself a sharp knife and a good playlist and get going. There’s still time to make yourself the MVP by bringing this to the party, or spicing up your own patio fare.

But first, a couple of things: I’ve now made this several times , and each time I’ve overdone it on the volume of shallots. Only once did they really crisp up—which was tremendous and worth cranking up the heat a bit and then babysitting the pot until they were evenly brown. That said, it was pretty tremendous all the other times too. Just make sure you brown the shallots and garlic without burning them. I now use a bigger pot than seems necessary, which allows the shallots to really relax in their hot oil bath.

It’s worth going to the original Bon Appetit recipe and reading the comments. I think “off the hook” is the best reader description. We’ve put it on burgers, quesadillas, sandwiches, pizza, baked sweet potatoes and eggs; into salads and on bruschetta and burratta and toast. It’s so going to get stirred into soups this fall. I may draw the line at using it as an ice cream topper, but…no promises.

Finally, there is apparently an excellent version of this at Trader Joe’s called chile onion crunch. Add that to the pain of not having a TJ’s near me. For now, I chop.

PS This one goes out to Sister B, who hates bread and butter pickles and cilantro (see quick, easy, cheap salsa), but hung in there for this. Three’s the charm, baby.

Divide the goods into one big jar or smaller jars that you can fit a spoon into. Put the lids on tight and prepare to make a lot of friends. If you pour off a bunch of the oil you can then use it to make a sassy version of aquafaba mayo. 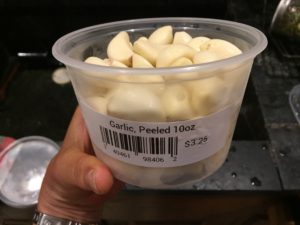 A shortcut worth every penny

I know, it’s summer and we should be all about fresh tomatoes (and corn of course). That said, when it comes to salsa, you can really never have enough. So, when there is a quick, easy and cheap way to make a boatload of salsa yourself, bring on the can opener. (For further proof of canned tomato greatness, see Funitella Bruschetta.)

No need to belabor the intro here. I love a chunky fresh salsa with all kinds or weirdness in it: beans, corn, mango, etc. I also love a straight up tomato salsa with fresh jalapeno, lime and cilantro. This is that salsa, AKA Pioneer Woman’s Restaurant Salsa (she even gives you a video in case pushing buttons is a challenge). It makes a TON, so get a few jars ready, fire up your food processor and be ready for the weekend.

Coming up next: The third of three must-have condiments. Get a playlist and a sharp knife and prepare for some chopping. I promise it’s worth it!

This is a very large batch. you’re totally safe with a 12-cup food processor, or you can process the ingredients in batches and then mix everything together in a large mixing bowl.

Divide the batch into as many jars as you like and you are ready to take your show on the road. This is NOT shelf stable, so keep it in the fridge.

Got an update for you: It’s blueberry season. So why are you looking at pickles? Let me ‘splain. To be sure, every day that passes without me getting out to the amazingly awesome Super Acres to pick blueberries, reminds me summer is ticking by too fast. But, sadly, that ticking isn’t enough to get me out there…yet. Those of you who are more industrious can get busy with your blueberries by making Blueberry Dutch Bunny ,  overnight blueberry muffins or blueberry mint lemonade .

For the rest of you, here is a tasty consolation prize. I’m about to hit you with three straight posts on condiments. Sure, summer is all about grilling, and picnics, but both beg for condiments. Great condiments can elevate anything on a bun or a bed of greens. This summer (while not at the blueberry patch), I’ve been making three excellent condiments that now have permanent residence in my fridge.

First off, bread and butter pickles, for a lot of good reasons:

I discovered this after a chance evening encounter with a neighbor who kindly gave me an armful of cukes. I’m always grateful for fresh produce, but cucumbers straight up can be a tough sell in my house. They are not easily disguised, either by grating into a burger or a stir fry, and they don’t freeze well, unless your end game is to weaponize them.

If you end up with a stash of cucumbers, or if you are a pickle lover with no patience for the canning process, these babies are for you. Just a few ingredients and zero talent required. All you need is a little time for them to hang out in the fridge. Basically you can go from evening neighbor garden encounter to proud pickle producer by the time you settle in to Netflix, or bed, or whatever makes you happy. 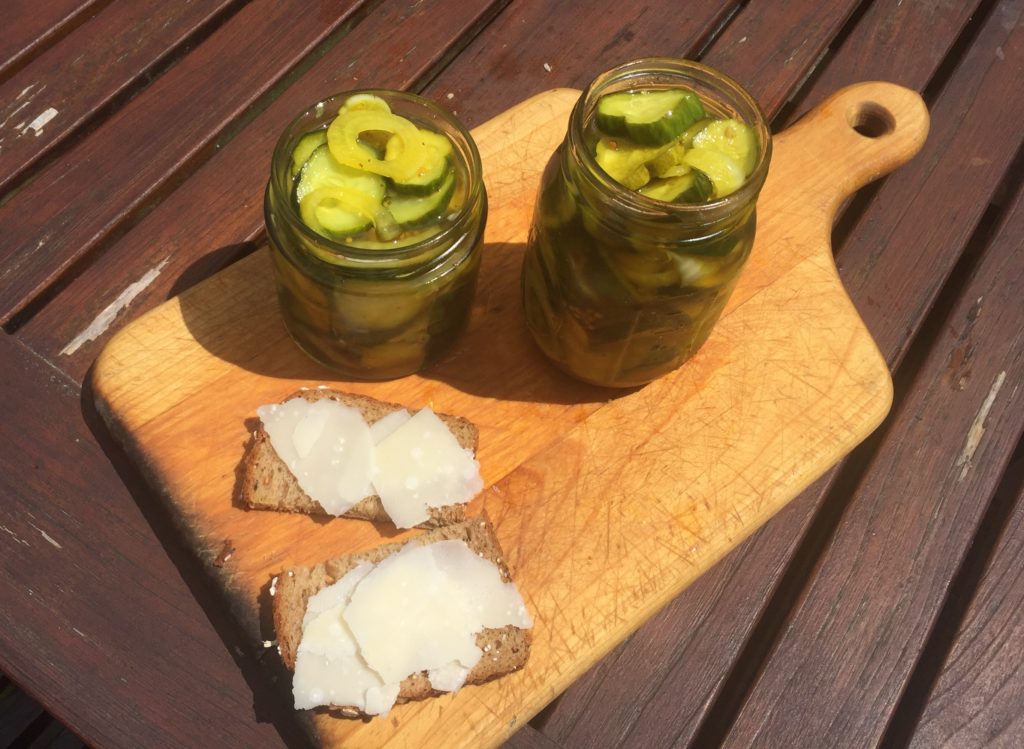 Just add…anything really. Get your pic-nic on!

As made here these are not shelf stable. Store them in the fridge. If you’re looking for proper canning instruction, get back on your google and good luck—I’ll be cheering you on!