Well, I blew right by Thanksgiving and then went on tour. Since then, I have not cooked one bit, which, I have to admit, is kind of nice. I wanted to cook, but I’ve been on the road, and as a fairly messy cook it didn’t seem right to invade my hosts’ kitchens and disrupt their standards of neatness and order. If only there was some book like, “The Freeloaders Guide to Low-Impact Cooking.” Anyone want to get on that? Anyone?

Let’s loop back to Thanksgiving for a moment, and specifically to veggie sides, because ‘tis the season that we all need some healthy greens to balance the rest of what’s coming in. This salad is simple but tasty, easy to prep ahead and holds up (and even improves) over time.

I found it in desperation when I got a last-minute Brussels sprouts request. My go–to roasted Brussels sprouts require a hot oven and last minute prep, which was a deal breaker. Also, to keep the Thanksgiving peace, I wanted something less aggressive than the kale Brussels sprouts salad that was my previous go-to. This seemed like the perfect balance of healthy and mainstream, with a touch of sweetness and crunch to make it holiday material.

The only labor is shaving the Brussels sprouts, but you shoppers know there are ways to buy yourself out of that (I do like the thin slices you get from using a mandoline, but let’s not get picky over the holidays—bagged shortcuts are fine!) The recipe calls for dates, and I suggest the firmer (and cheaper, and easier to find) deglet vs medjool. You could also use dried cranberries or cherries if you prefer, for a more festive look, but the dates are darned good and less bossy in flavor.

OK that’s it! I hope you like this salad and it makes you feel better about eating cookies and chocolate for breakfast.

Want some taro fries with that? Localvore ski bums rejoice at the Mtn. Roots truck in Squawllywood.

You know you don’t get out much when your culinary discoveries come from a food truck at a ski area. Granted, this was a California ski area, and the truck was a tricked out Mystery Machine called “Mtn Roots.” But still. On a recent visit home to Squaw Valley my sister snagged “us” some crispy Brussels sprouts chips off the truck and a new addiction was born. And no, she did not get anywhere near her fair share.

That was a month ago, so I was beyond psyched when a post for these very delicacies came to me via Bevin Wallace’s Real Life Delicious blog. RLD is a great site for fuss-free healthy eating, and Bevin is in to the paleo thing now, so its all healthy and paleo, which is totally overachieving. But as long as it tastes good I’m good with it. If you live in the Denver area get on over to Bevin’s kitchen classes. If you don’t, hunker in for some Beviliciousness right now.

There are a few things to love about this recipe, beyond the sheer yum factor. First Bevin tells you exactly what types of tools and containers to use. Less guesswork. More direction. All good. As you are trimming your sprouts you may be thinking, “Boy this is a lot of work for one snack,” until you realize that you are actually doing the prep work you have to do anyway for Brussels sprouts, which brings me to the next stroke of recipe brilliance here—it’s two-fer! You get ready-to-roast Brussels sprouts AND some yummy snacks out of the deal. (Who loves ya baby? I would never ever make you work too hard.)

I’d say the kids loved them but that would be overselling because only one kid was around. But he is a bit of a Russian judge of my food and I had to beg him to leave some for his Dad. (I ate them anyway because when  Dad arrived he wasn’t quick enough.)

And now, here it is— Groovy California ski area food right in your own kitchen. My only suggested tweaks would be to up the temp to 375, expect them to take at least 15 minutes, and make a real effort to get those suckers in only one layer so they really crisp up. Now dig in!

Preheat the oven to 350 degrees. Start by getting out a cutting board, a bowl, and a lidded storage container. Trim the ends off the Brussels sprouts and then remove the darker-green outer leaves; some will fall off when you cut the ends, some you might need to pull off. Put the leaves in one bowl; cut the remaining sprouts in half or quarters and put them in the lidded container. When you’re done, put the container of trimmed sprouts in the fridge for later use.

Toss the leaves with the oil and salt (go easy on the salt; it’s easy to get too much) and spread them in a single later on a baking sheet lined with parchment paper (you might need to do this in two batches). Bake for 10 mins. and check to see if they’re done to your liking. They should be somewhat crispy and brown on the edges. If not, rotate the pan and bake another 3-5 mins., watching closely so they don’t burn. When they’re done, lift the parchment with two hands and use it as a spout to pour the delicate chips into a bowl.

Now, try to eat just one.

Note: When you want to roast your trimmed sprouts, just toss them with some olive oil and salt, spread them on a baking sheet and pop them into a hot (400 or so) oven until they look awesomely roasty.

Who said it ain’t easy being green? 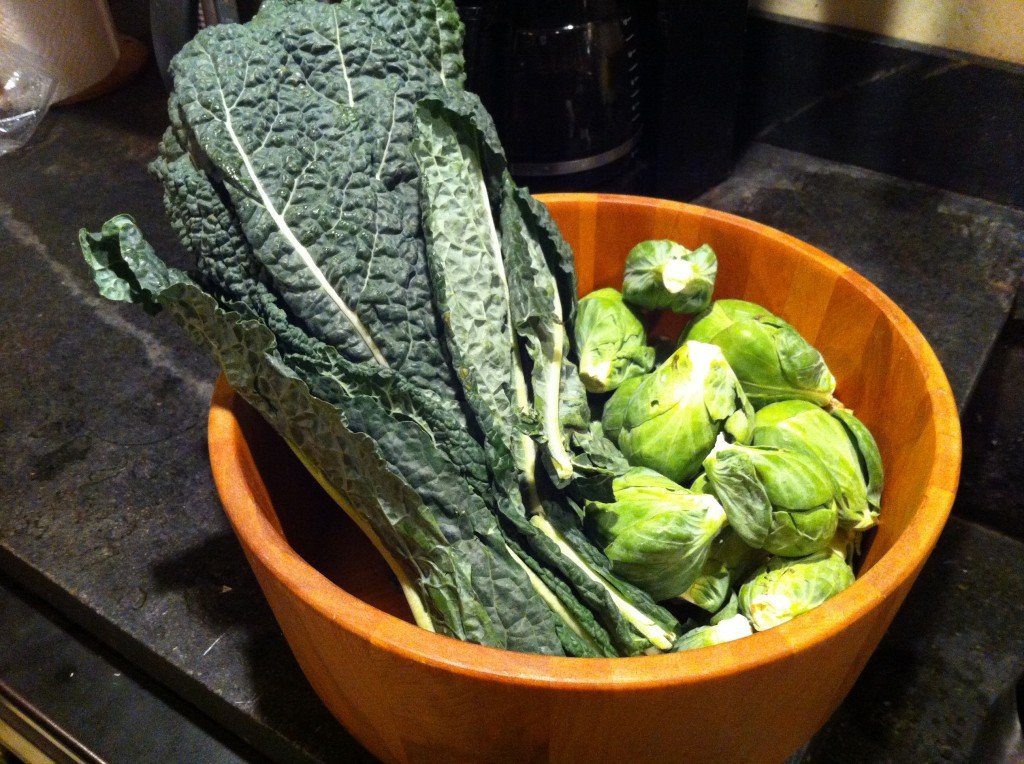 The party is OVER. Bring on the kale!

Harsh, I know. And really, at this point does our world need another kale salad? After tasting this one I can happily say, yes! It’s simple, delicious, healthy, moderately addictive, loves to travel and is just a tad decadent with the cheese and almonds. And it is just the thing to rescue you from the Halloween sugar coma. Not that I’d know anything about that.

I highly recommend dressing this well before serving time. When I first had it at a picnic the salad was dressed and tossed before we went on an hour plus hike. It was perfect.  This originally came from Bon Appetit.

Measure 1/2 cup oil into a cup. Spoon 1 tablespoon oil from cup into a small skillet; heat oil over medium-high heat. Add almonds to skillet and stir frequently until golden brown in spots, about 2 minutes. Transfer nuts to a paper towel–lined plate. Sprinkle almonds lightly with salt.

Add dressing and cheese to kale mixture (see intro above for timing—the earlier the better); toss to coat. Season lightly with salt and pepper. Garnish with almonds. 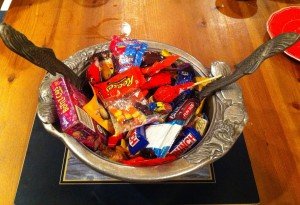