Dedicated readers will know that I already posted a recipe for maple creemeee pie, back in November. Then, it was a way to fill a seasonal void. At the height of summer in New England maple creemee options abound, but…what about our friends in the rest of the country? And around the globe? What are they to do?

Here’s the basic concept. Whip up the same amazing pretzel crust, but press it into lined muffin tins. Ladle in the same creamy filling, then pop the tray in the freezer. A couple hours later you’ll have individual servings you can eat by hand, using the liner as a napkin; alternatively you can be civilized, put it on a plate (even top it with some berries) and eat it with a fork. 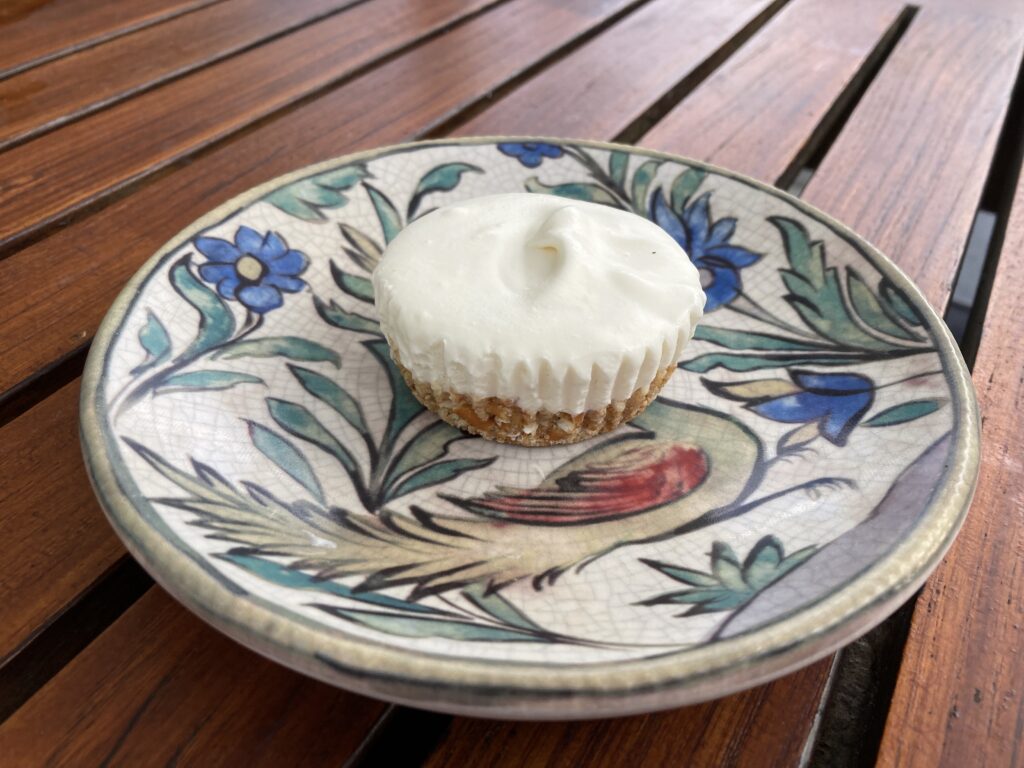 The civilized version, ready for berries or just your fork

As discussed at length in the original post, my preferred version relies on the alcohol in maple liqueur for both extra flavor and to keep the filling from freezing up like a brick. To make up for both, the non alcoholic version called for more maple syrup. I got some feedback that the sober version was too sweet. I have since adjusted down the syrup in that version, and upped the cream in both versions. All that said, this is wayyyyy more art than science, so give a taste along the way and follow your heart.

For non maple fans, or for a citrus option, this technique can easily be used to make mini versions of Nina’s Margarita Pie. Finally, to my Vegan friends. I still have not had a victory here, but this is the latest recipe I am going to try, once I find unsweetened oat milk creamer. If you beat me to it, let me know how it goes.

Now, my friends, as a late summer treat, I give you mini maple creemee pies. I hope you love them!

Maple Creemee Pies of All Sizes

Prep time: 15 mins, plus at least 4 hours freezing time for a big pie, and 2 for the minis.

*For non alcoholic version, omit liqueur, and adjust to use 1/4 cup maple syrup, or to taste,  plus 1/2 tsp vanilla (optional).

** I like the full 2 cups of cream. If you don’t use the liqueur, and boost the maple flavor with more than 1/4 cup syrup, extra cream is the right call. And make sure to whip it like you mean it!

*** These are way optional. Veteran testers say leave it alone as is, but one rogue tester notes that the pro pies at Mac’s Maple (with a far inferior crust BTW) featured these. He was enamored by the flourish. 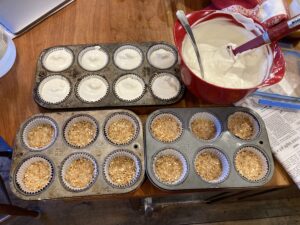 Make Pie Crust:
Melt margarine or butter and combine with sugar and pretzel pieces. Press into buttered 9” pie pan. For the mini versions, line 20 (ish) regular sized muffin tins with cupcake liners. Spoon the crust mixture into the cups until it is all used up, then use an empty liner to press the crust in place firmly. Refrigerate or freeze to cool while you make the filling.

Whip the cream until it is very thick and stiff. I mean it—this is your structure. Fold in the whipped cream as gently as you can until it is fully incorporated. Pour into pie crust or ladle into the mini crusts and freeze for at least four hours, more to be safe. Two hours for the minis should do it.

If you are celebrating away from home, where you have the time and space for it to freeze, it is easily assembled on site. Just prep the pretzels first and put them in a Ziploc bag. Portion out the booze and syrup, grab a pie plate and fill a bag with the rest of the ingredients— cream, a stick of butter and that can of sweetened condensed milk that expires sometime this decade. Make the pie right away so it has max time to freeze, and you have max time to put your feet up and prepare to be worshipped.

On a side note, I had previously said it was not advisable to travel with this in warm weather. I stand corrected. I sent a pie, in the back seat in a reusable freezer bag, to a friend’s house, with instructions for the courier to immediately put it in the freezer. You can guess what didn’t happen. Flash forward to the following morning…the pie is secretly returned from the back seat to our own freezer, hidden under a big bag of blueberries.  Flash forward two weeks…I unearth the buried pie, have a piece and it’s still delish! That, my friends is a true story of survival. 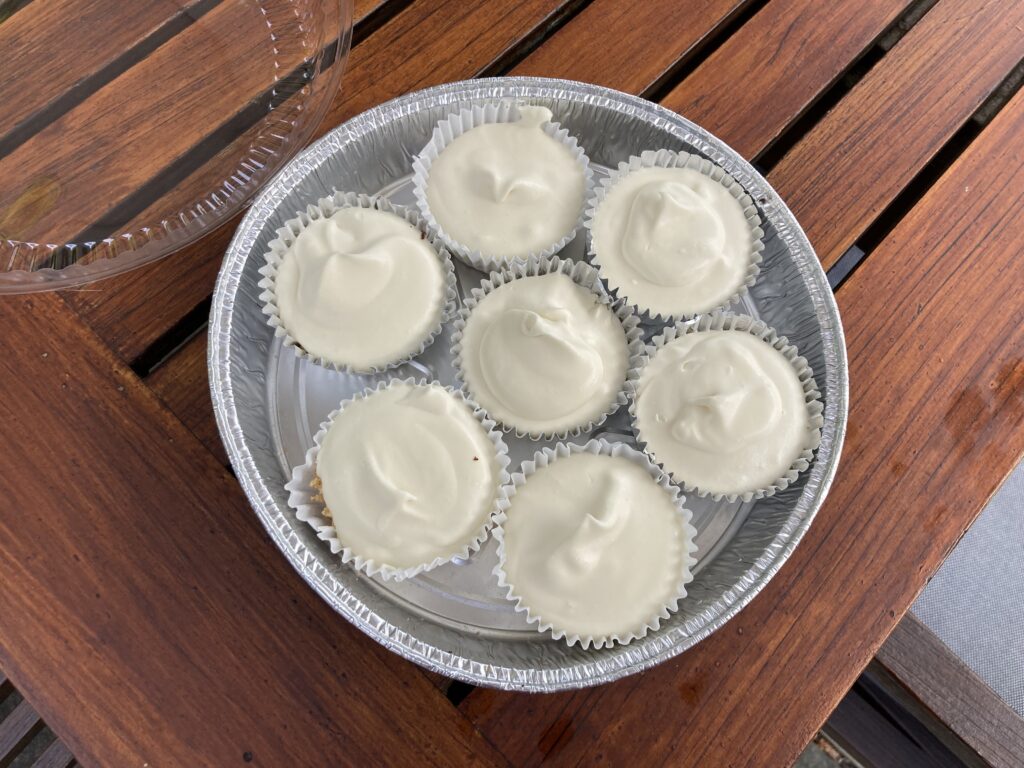 A 9-inch cake pan, with plastic lid, is the perfect getaway vehicle.

This is it people. The opening weekend of summer is upon us, and we need to be ready. We’ve got three months of picnics, drive ins, hikes, sleepovers, pool parties, campouts, BBQ’s, road trips, beach trips, lake visits, river running. In short, this is when you need to get your Bring It on!

You don’t just want to bring “something” to all these occasions. You want to bring the thing that keeps people coming back for more. Here are a few faves:

My number one recommendation is, of course, Hero Slaw, but there are other salads that will stand up to travel, and make you popular once you arrive. Panzanella and Shrimp and Bulgur salad are hard to beat for ease and deliciousness. If your numbers are smaller and you can handle a little on-site assembly, let them eat pineapple avocado salad.

Casually plunk People’s Choice Cornbread on the table and watch the kids move right on in. Use the same casual approach with a loaf or two of Easiest French Bread Ever, which you can also slice up for bruschetta or make in a well-buttered loaf pan and use for sandwiches (hellooo road trips!)

If you are on cocktail duty for a crowd, bust out your Tupperware pitchers and freeze up a big batch of frosé or frozen daquiris. Nobody’s going to send you away with a pitcher of watermelon sangria either.

And fergawdsakes don’t forget the cookies! Champion chip cookies and these cinnamon-y oatmeal raisin ones will do the trick.

And speaking of dessert…I recently met a totally Memorial Day worthy recipe. “Rubble,” is a creation straight from Squaw Valley, courtesy of Treas, the Squaw of Granite Chief. She made it for us with chocolate, vanilla, coffee and strawberry ice cream, and with chocolate and caramel sauce. (Overachiever!) Eminently adaptable Rubble can be made with any combo of ice cream and sauce, and it can be expanded to fit the size of the group. Perhaps best of all, it can be sourced at pretty much any market— even a decent mini mart.

Treas aspires to make this in more grown up flavor combos, but I can attest that the straight up chocolate, coffee, vanilla, strawberry is fantastic. As a bonus it can be assembled by kids or adults with no real regard for exact instruction or amounts.

You will need, from the bottom up:

Smash/break up a few biscotti (do not crumble them too much. You want to be able to identify them), and scatter them across the parchment.

On top of that, start layering up: scoops of ice cream, a good drizzle of sauce, a smattering of berries and a sprinkling of chopped almonds over the whole shebang. Depending on the size of your crowd you may need to make more layers. Use your best artistic dessert instincts on this.

Put your masterpiece in the freezer so it coalesces into one frozen pile.

A few minutes before serving take out the rubble and let it soften just enough to be penetrable.

Once frozen, rubble can take a short trip in the car with no ill effects. It’s not exactly tailgate fare though.

Happy Memorial Day all, and welcome to summer!