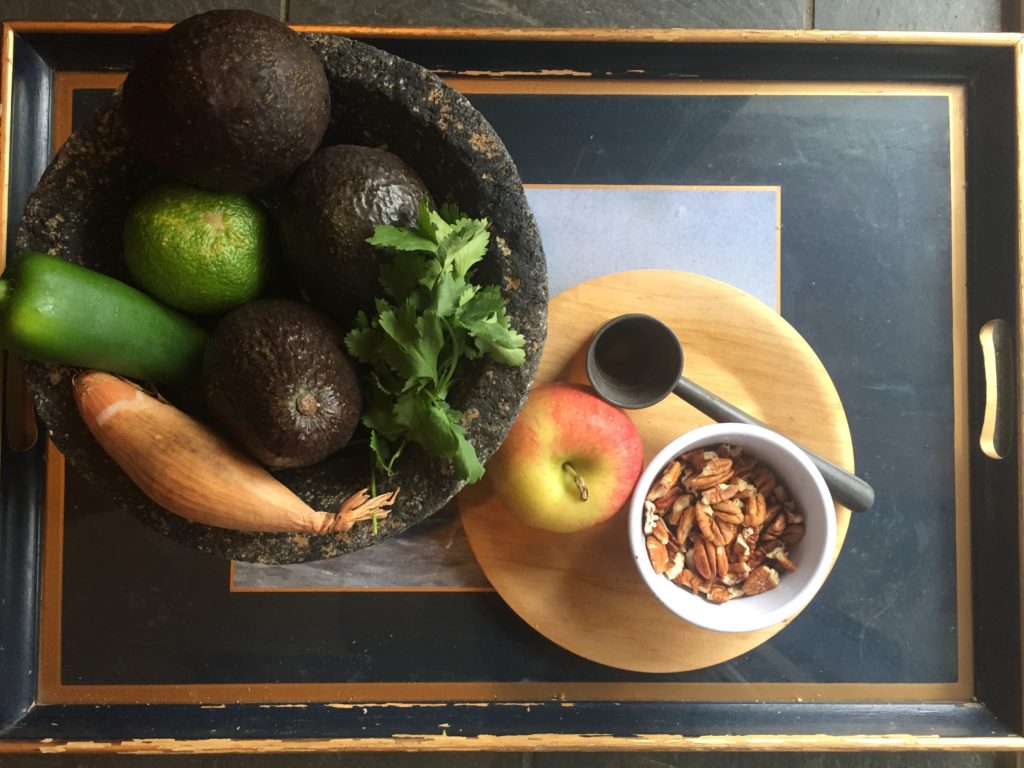 Some days we have difficult choices. Saturday will be one such day. Do you wear a fine hat and celebrate the first Saturday in May according to Kentucky tradition, or do you scarf down some tacos and join the Cinco de Mayo party?

Or, do you do the sensible thing and celebrate both? Well duh! I do not normally do this, but I am posting two untried recipes. Whyyyyyy? Because it’s important! Because it’s Kentucky Derby Day and Cinco de Mayo AND its almost summer. That means it’s high time to get your guac on.

I am a wing it kind of guac maker. As a Californian that is my birthright. That said, you can always improve. These two new takes on guac are both from Mexican food jefe Roberto Santibañez by way of Food52.  The first is unique in approach but features totally classic ingredients. It hits all the must haves and nothing more: lime, cilantro, jalapeño, onion are all pulverized FIRST then added to avocados. As Santibañez says, “There is a very important textural thing to guacamole — we never really mush up the avocado.” I knew I liked this guy. I really felt the love though when I read about his second creation, which is totally wacky. It involves a splash of tequila (he had me there), apples (hello New England) and pecans (a nod to the America south and more weirdness). My awesome neighbor just came back from Georgia bearing two bags of pecans that she harvested and shelled herself. Fate. Kismet. Weird guacamole.

Anyway, here are the recipes. I will be making and testing them both on Saturday, celebrating both occasions of course.  If you do the same please tell me what you think and we can discuss. Whatever you choose to celebrate, have a fantabulous weekend!

Author Notes: Roberto says:” The apple needs to be sweet and crunchy (not Granny Smith-tart) and diced not too fine, to contrast just vocally enough with the guac’s salty heat and richness. The pecans should be tossed in butter after toasting, not before, so you get fresh, unbrowned butter flavor, too. Adapted slightly from Truly Mexican (Houghton Mifflin Harcourt, 2011).

Makes: 2 cups
For the apples & pecans

With this in your house, how can your weekend go wrong?

What we have here, my friends, is a dream Double Header. Cinco de Mayo and the Kentucky Derby, on successive non-school nights. If there was ever a time to have a cool, refreshing  drink in your hand (and a snazzy hat on your head) this is it.

In honor of creative cocktails and mocktails, below are two infused simple syrups that will give your drinks a fresh twist appropriate for the upcoming occasions. And what the hell—keep scrolling for a few cocktail concoctions as well, though they are only a starting point. Don’t be afraid of using the jalapeno syrup in your mint julep (or even subbing cilantro for the mint) for some south of the border cha-cha.

Have fun and if you’re placing bets, good luck!

In a small saucepan over high heat, combine 1 cup water, sugar, and jalapeños. Bring to a boil, stirring to dissolve sugar. Reduce heat to medium and allow to simmer to three to four minutes, stirring frequently. Remove from heat and let steep 20 minutes.

Strain syrup, discard jalapeños (or chop up the now mild pepper and use as desired), and cool syrup. (Simple syrup can be refrigerated, in an airtight container, for up to 6 months. It keeps even better if you add a capful of vodka.)

Combine water and sugar in a saucepan, and bring it to a slow boil while stirring continuously until all the sugar has dissolved. Just as the mixture begins to boil, add 1 cup of fresh cilantro. Simmer for 5-10 minutes and let cool (this syrup will keep in your fridge for about a month. More if you add a capful of vodka).

Now how do we use them? Below are two ideas, but this is no time to follow directions. Use these in whatever cocktail or mocktail could use some salsa sass.

Cilantro coolers: wayyyy better than a kale smoothie on a fine spring night

Cool. Hot. Fresh. This one has it all. slightly adapted from organic authority

To a cocktail shaker add:

Muddle well with a muddler or a heftier pestle. Then add:

Shake well for twenty seconds and then strain* into a lowball glass filled with ice. Garnish with a wheel of cucumber and a sprig of cilantro.

*brave multi taskers, fans of zero waste, and those desperate for a meal idea because they spent so much time prepping cocktails will love this: fully drain the remaining cucumber and cilantro shrapnel and mix it in with Chinese noodles, a few more veggies and soy dressing for a summery salad.

To a shaker add:

Shake it like you mean it, then strain into a cocktail glass. Garnish with a slice of lime, a slice of jalapeno and a sprig of cilantro.

And finally, if making margs for a bigger crew…

Spicy Margaritas by the Pitcher

Stir together with ice in a large pitcher and pour into 8 glasses.