Welcome to the steamy hot heart of summer! I was feeling like a slacker for being a solid month late in posting this strawberry salad. As with all the rhubarb recipes I meant to post, I thought I’d missed my window. BUT it seems fate and Mother Nature have conspired to make the timing downright perfect. Strawberry season is three weeks late here, thanks to all that June rain (that I missed in CA…#notsorry).

This recipe comes from the fabulous Bevin Wallace’s Real Life Delicious blog and is based on a salad at Vail’s Chophouse. If you can get away with a DIY version of anything in Vail you’re usually $100 ahead of a game, even when it comes to salad. Considering the other revelation that this year is serving up a bumper crop of strawberries, I’d highly encourage you to try this salad. The dressing alone is worth having on hand, and the whole shebang is a great addition to any gathering.

The only slightly labor intensive thing here are the candied pecans. You could of course use some fancy packaged pecans, or simply sub toasted pecans but, c’mon, live a little. It’s salad and it’s summer and as the strawberries will tell you, it’s been a gloomy spring. Time to celebrate! 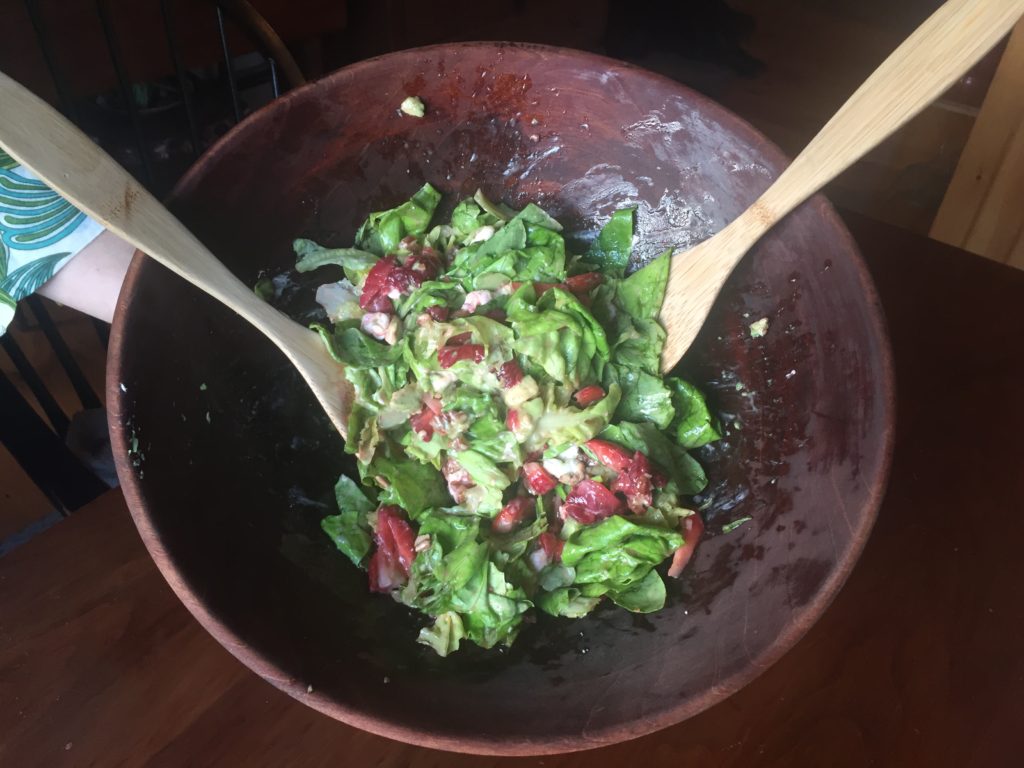 Make the candied pecans: Preheat oven to 250 degrees. Mix sugar, cinnamon, and salt in a bowl. Whisk egg white and 1 tbs. water together in a separate bowl until frothy. Toss pecans into the egg white mixture. Mix sugar mixture into pecan mixture until pecans are evenly coated. Spread coated pecans onto a baking sheet. Bake, stirring every 5 minutes, until pecans are evenly browned, about 25 mins. Allow to cool. In the meantime…

Make the dressing: Whisk together the garlic, mustard, vinegar, lemon juice, honey, salt & pepper in a bowl. Slowly whisk in the olive oil until the dressing is emulsified.

Make the salad: Tear the lettuce and place in a large (larger than you think you need) bowl. Add the strawberries, avocado, goat cheese, and about 4 oz. of the pecans. Drizzle on the dressing and toss gently.

Want more reason to get fresh berries? Check out these strawberry all stars.

First off, apologies all around for the technical difficulties last week, and to those of you who got a sad, gray, “Legacy IP DNS blah blah” message instead of a recipe for Watermelon Rosemary Lemonade. Thanks to a kind man named Piotr who desperately needs a vowel, we are back up and running. Now, on to this weekend.

Some recipes you just have to know. Ina Garten’s panzanella is one of them, especially in summer. In addition to being a way to use a whole lot of summer’s best produce, it’s easy to prep, easy to bring, easy to assemble and it’s DELISH. Plus, it’s a way to eat crispy bread and call it dinner (or breakfast if you can’t help yourself the morning after). Ina (AKA The Barefoot Contessa, and the goddess of bringing it) has many panzanellas in her repertoire, including an awesome greek version, but if you only master this one (and you will on your first try) the Kingdom of Picnic Greatness is yours.

As I mentioned in the recipe for Asparagus Panzanella, you can use your imagination, your cravings and the contents of your produce bin to tweak panzanella in all kinds of ways. It’s a tasty go-to on some seriously hot days. And by the way, if you live in the Upper Valley and are looking for some places to cool off check out this post on Swimming Holes and Soft Serve.

Ok peeps, stay cool out there!

Heat the oil in a large sauté pan. Add the bread and salt; cook over low to medium heat, tossing frequently, for 10 minutes, or until nicely browned. Add more oil as needed.

For the vinaigrette, whisk together the ingredients.

In a large bowl, mix the tomatoes, cucumber, red pepper, yellow pepper, red onion, basil, and capers. Add the bread cubes and toss with the vinaigrette. Season liberally with salt and pepper. Serve, or allow the salad to sit for about half an hour for the flavors to blend.

You can prep the bread, veggies and vinaigrette in advance and store in their own containers. Mix it all up on site a half hour before serving.